"Associate Professor Daniel Friess from the National University of Singapore said the mangroves at the OCBC Mangrove Park will take root via the Ecological Mangrove Restoration (EMR) method. Prof Friess is a member of the Restore Ubin Mangroves Initiative, a group that advocates the restoration of mangrove sites on the island."

Plans to naturally establish 8,000 mangrove trees in abandoned aquaculture ponds in Pulau Ubin were announced on Saturday, as part of a partnership between the National Parks Board (NParks) and OCBC Bank to increase Singapore’s capacity for carbon storage.

These trees will be located in the ponds of Sungei Durian – with a total area of 4ha – along the southern coast of the island, and the site will eventually be known as OCBC Mangrove Park.

OCBC will also grow an additional 1,000 saplings along the coastline as the park is being developed.
Read more »
Posted by Ria Tan at 06:33 No comments:

Email ThisBlogThis!Share to TwitterShare to FacebookShare to Pinterest
Labels: on the news

Minister Desmond Lee announced R.U.M.'s project as part of “nature-based solutions” to build the resilience of Singapore’s coastlines at Pulau Ubin, during the Festival of Biodiversity (Sep 2021). 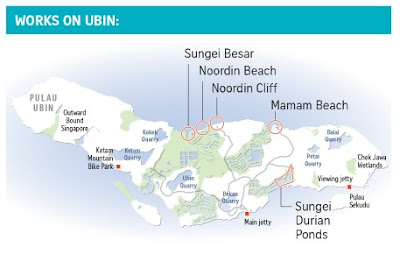 Email ThisBlogThis!Share to TwitterShare to FacebookShare to Pinterest
Labels: on the news

Join this online talk by Prof Dan Friess who will share how to do mangrove restoration the right way! 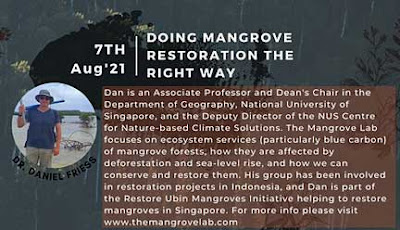 This talk is part of a series in conjunction with the launch of the United Nations Decade on Ecosystem Restoration. Join the other talks in July-August, covering other important ecosystems that can be found in Singapore. Learn more about what is going on to restore them, and how you can make a difference. Register here.

Email ThisBlogThis!Share to TwitterShare to FacebookShare to Pinterest
Labels: outreach

26 Sep (Sat): Talk on "Working with nature to restore our mangroves"

How can we give Mother Nature a helping hand in restoring mangroves? Mangroves provide us with many ecological and economic benefits, and many people are now interested to restore them and increase their area.
Join Prof Dan Friess (Department of Geography, NUS) as he shares more about mangrove restoration. Successful mangrove restoration faces many challenges, though a new approach —Ecological Mangrove Restoration — is helping us to overcome these challenges in Singapore, Southeast Asia and beyond.

Register online here
This talk is part of Ubin Day and Pesta Ubin.

Email ThisBlogThis!Share to TwitterShare to FacebookShare to Pinterest
Labels: outreach

Volunteers with Nature Society Singapore for Restore Ubin Mangrove Initiative (RUM) were at RUM Site 1 for a beach and mangrove cleannup last Saturday afternoon (16 November). A total of 51kg of marine trash consisting of mostly plastics and styrofoam pieces were removed from the site during the one hour cleanup.

Bravo and thanks to our participants (new and returning) for your wonderful energy and effort!! Thanks to Cheryl Lao for leading the cleanup, and thanks to our regular helpers As Ma. Yan, Pip, Vincent and Shu Ying. A shoutout to Lisa Lim who is recovering from a leg injury and organized the event from behind the scenes.

Keep following us on this blog or our facebook page for future cleanups and other activities.

Email ThisBlogThis!Share to TwitterShare to FacebookShare to Pinterest
Labels: cleanup

Join Lisa Lim and volunteers from R.U.M. and Nature Society Singapore (NSS), Marine Conservation Group to clean up this site in preparation for mangrove restoration!

More details will be email to volunteers upon successful registration. (Please check your spam folder.)

Posted by Ravenblack at 06:03 No comments:

Email ThisBlogThis!Share to TwitterShare to FacebookShare to Pinterest
Labels: cleanup


Volunteers with Nature Society Singapore for Restore Ubin Mangrove Initiative (RUM) were at RUM Site 1 for a beach and mangrove cleannup last Sunday evening (15 September). A total of 113.2kg of trash and marine debris were removed from the site. This cleanup is an effort to clear marine debris accumilation from the site in preparation for mangrove restoration. At the same time, participants get to visit the site and learn about RUM and the ecological mangrove restoration method. (What is Ecological Mangrove Restoration?) 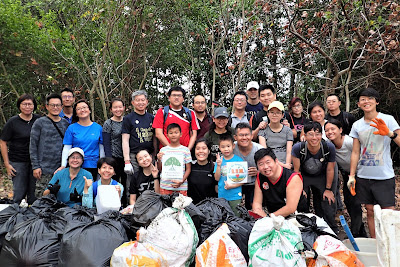 Last Sunday's cleanup is also held in conjunction with International Coastal Cleanup (ICC) which is an annual coastal cleanup event held around the world in the month of September.

Read more »
Posted by Ravenblack at 05:41 No comments:

This public group is for everyone who loves the mangroves of Pulau Ubin. Get updates on R.U.M. happenings and more!

For registered R.U.M. volunteers: get updates on volunteer opportunities, sign up for volunteer activities.

Thanks to Nor Lastrina Hamid for this video clip about R.U.M. and how you can make a difference for mangroves at Pulau Ubin!

Photos of mangroves from wildsingapore

R.U.M. A3 poster for dowload